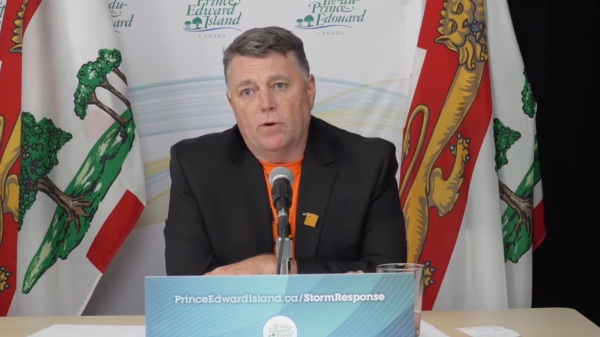 During a post-Fiona media briefing on September 30, Premier Dennis King made reference to quarterly meetings his office holds with Maritime Electric. He was responding to a question from The Guardian’s Logan MacLean about whether the province would be willing to cost-share a project with the private utility to bury power lines.

Islanders have had a lot of questions after many went without power for over two weeks following Fiona. I wanted to find out what discussions Premier King has had with the utility around storm preparations and adapting the grid to withstand stronger storms since post-tropical storm Dorian hit the Island in September 2019. I filed a request for information asking for any notes made by the Premier and provincial staff, as well as agendas, meeting minutes and presentations related to these meetings. My request was backdated to before post-tropical storm Dorian hit.

I assumed, wrongly, that I would get back a trove of documents which I would be able to use to give Island Edition readers a better sense of the conversations that take place at these high-level meetings. Boy, was I wrong.

I received this 25-page PDF (600kb) which mostly contains emails around scheduling and rescheduling meetings. The request yielded only two meeting agendas, and one presentation about some wind farm projects. No notes. No meeting minutes.

I followed up on the lack of records and was told that the Access and Privacy Services Office (APSO) had asked if meeting minutes existed, APSO was told none could be located. What?

So that’s the story here. The province is holding regular high-level meetings with Maritime Electric, but no one in the Premier’s office is taking notes. Or if they are taking notes, they’re throwing them away after the meeting. Either way, without an explanation, I have no choice but to leave it to you to draw your own conclusions.

Note: this piece is different from what I usually do here. I thought about moving on and dropping the story when I received back basically nothing useful. But on second though, there is a story here. There’s more to be told, I’m sure. I’ve reached out to the Premier’s office for comment.

🗳️ Twitter Poll: Do you think it’s acceptable that (the province) would hold regular meetings with Maritime Electric, but have no recorded minutes or notes from these meetings?